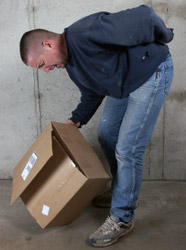 Every workplace injury should be carefully and thoroughly evaluated for a potential third party claim. The reputed California job injury attorneys at Bisnar Chase have an outstanding track record for finding and pursuing third party liability claims.

We understand the serious repercussions of job-related injuries - that they can impose severe emotional and financial burdens on workers and their families. We work diligently to help you obtain maximum compensation for your significant losses.

Accidents and injuries are common in any workplace. They are more widely prevalent in some industries such as construction and manufacturing where workers tend to operate heavy machinery and perform their jobs in a highly volatile environment. However, it is the employer's responsibility to ensure that workers have a safe environment to do their jobs. The U.S. Occupational Safety and Health Administration (OSHA) lists safety measures for each industry to help prevent tragic or catastrophic accidents in the workplace. A number of job-related accidents occur as a result of safety violations in the workplace. When workers are injured on the job, there are ways and means in which they can seek compensation for their significant losses.

According to OSHA the most common job fatalities reported are related to construction and OSHA has named them the "Fatal Four". We have listed them from highest to lowest percent:

Even though only 9% of job site fatalities are from electrocution, one person per day is electrocuted on the job leading to serious injury. OSHA has provided a "Electrical Safety Participant Guide" for construction safety and health.

OSHA says that 419 workers lives would be saved each year in U.S. with stricter safety measures implemented.

Since 1992 job site fatalities have declined. Unfortunately even one death or permanent injury on a job site is devastating. It has a direct impact both emotionally and financially on the worker's entire family.

If you have suffered an injury on the job, you may be completely overwhelmed. However, it is important that you or a family member complete several procedural requirements in order to ensure that your rights are protected and that you receive the compensation to which you are entitled.

Unfortunately, many workers have their claims denied and are forced to return to work before they have fully recovered from their injuries. There are a number of reasons why a claim could be denied. Insurance providers will often look for any excuse to save money. Even individuals who clearly suffered an injury while conducting business can have their claim denied if they make mistakes while filling out the forms.

Many victims of California job injuries are not aware of their legal rights and options and fail to get the support they need. You are allowed to refuse an inadequate settlement and you can appeal the decision of an insurance provider, if it is unsatisfactory to you.

A workers' compensation claim is not the only route by which injured workers can seek damages. Very often, be it a construction accident or an industrial mishap, we see that there are many other parties involved. For example, the injured worker may be a contractor or a sub-contractor who may have been injured as the result of a dangerous condition on the property. In such cases, the property owner can be held accountable as well. In some cases, a worker may get seriously injured or killed as the result of a defective product such as a malfunctioning piece of machinery or a faulty part. In such a situation, the manufacturer of that piece of machinery or defective part can also be held liable.

In such cases, the worker or his family will need to file what is known as a "third-party claim," which is a personal injury or wrongful death claim filed against a party other than an employer. This claim can be filed in addition to the workers' compensation claim. Third-party claims are often worth many times more than the standard workers' compensation claim, which is why they can prove invaluable to injured workers and their families.