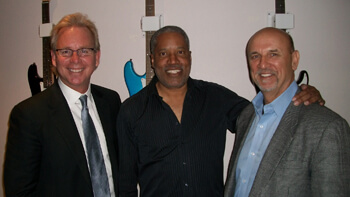 The show, hosted by "The Sage from South Central" Larry Elder -- an attorney, former host of the nationally syndicated "The Larry Elder Show" and current nationally-syndicated host of KABC radio's daily morning talk show in Los Angeles -- is designed to answer legal questions and to help alleviate the fear and confusion many people face when dealing with legal issues.

Chase, who has litigated dozens of jury trials, has recovered hundreds of millions of dollars for his clients, and has the highest rating possible for ethical standards and professional abilities from Martindale-Hubbell, was asked to serve as the show's official and exclusive personal injury expert to field personal injury and product liability questions and to discuss some of his firm's most high-profile cases with "Larry on the Law" listeners.

Currently, Chase serves as a Vice President of the Consumer Attorneys of California and is past President of the Orange County Trial Lawyers Association. He is a frequent lecturer on litigation-related topics in continuing education programs for trial lawyers.

He has published numerous articles and has made a number of radio and television appearances, including interviews on CBS Special Reports, Peter Jennings/World News Tonight, and America's Best Lawyers, in addition to FOX 11 News Los Angeles reports discussing vehicle black boxes and defective seat car seats.

His book, "Still Unsafe at Any Speed: Auto Defects That Cause Wrongful Deaths and Catastrophic Injuries," is the most comprehensive literary work on auto defects since Ralph Nader's 1965 book of the same subject, "Unsafe at Any Speed."

The son of a janitor, Elder was born and raised in South Central Los Angeles. He attended Brown University, receiving a BA in Political Science in 1974. He then attended University of Michigan, School of Law, graduating in 1977.

He was host of the television show, "Moral Court," distributed by Warner Brothers Television. In the fall of 2004, Warner Brothers returned Elder to daily television with "The Larry Elder Show," an hour-long, multitopic show that brought common sense, sound advice and realistic, workable solutions.

In his best-selling book, "The 10 Things You Can't Say in America," Elder skewers the crippling myths that dominate the public agenda. His latest book, "What's Race Got to Do with It? Why it's Time to Stop the Stupidest Argument in America," is being praised as an important, groundbreaking must-read for the future of race relations in America. Elder also writes a nationally syndicated newspaper column distributed through Creators Syndicate.

The Bisnar Chase Personal Injury Attorneys represent people who have been very seriously injured or lost a family member due to an accident, defective product or negligence throughout California. The law firm has won a wide variety of high profile, challenging cases against some of the nation's largest companies and governmental agencies. There is a reason their website address is bestatto-gatsby.netlify.app.

About Larry on the Law

Hosted by nationally-syndicated radio talk show host, best-selling author and attorney, Larry Elder, "Larry on the Law" is a stimulating weekly radio show designed to answer legal questions and conundrums and to help take away some of the fear and confusion people face when dealing with legal issues. Experts from a variety of legal branches, including personal injury, family law, tax/IRS and general law, field questions from listeners, impart legal advice and discuss cases that are informative, timely and interesting. One way or another, many of the issues facing our country today find themselves before the courts. If you have a legal problem or if something about the legal system is bugging you, "Larry on the Law," -- broadcast Saturdays on 790 KABC FM Los Angeles -- is your judge and jury authority. Tune in!