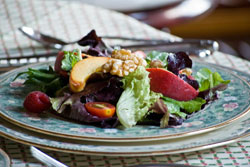 A new report released by the U.S. Centers for Disease Control and Prevention (CDC) states that leafy greens such as spinach, lettuce and kale caused the most number of food-borne illnesses in the United States between the years 1998 and 2008. According to the Jan. 29 CDC report, contaminated dairy resulted in the most hospitalizations and poultry that was tainted with bacteria such as E. coli or Salmonella accounted for the most food poisoning deaths.

The CDC study examined 4,887 outbreaks that resulted in 128,269 illnesses, hospitalizations and deaths when the food that caused them was known or suspected. The study appeared in the journal, Emerging Infectious Diseases. Researchers at the CDC found that leafy greens accounted for 23 percent of the illnesses and dairy products, 14 percent.

"I'm encouraged to see the CDC compile a more comprehensive report to track illnesses related to food-borne contamination. These numbers can be critical to studying food poisoning trends and categories of high-risk food products," said John Bisnar, founder of the Bisnar Chase personal injury law firm. "Hopefully, these numbers will equip government agencies and the food industry with the information they need to make what we put in our mouths safer. This new study has made it easier to identify the categories of food products that are causing the most illnesses."

Food producers have a legal and moral obligation to ensure that they are following all safety standards, Bisnar said. "As consumers, we rely heavily on these corporations to provide us with safe food. When the system fails, the consequences can be devastating for millions of Americans, which this newly released CDC study clearly shows."

The California personal injury lawyers of Bisnar Chase represent victims who have been sickened by contaminated food. The firm has been featured on a number of popular media outlets including Newsweek, Fox, NBC, and ABC and is known for its passionate pursuit of results for their clients. Since 1978, Bisnar Chase has recovered millions of dollars for seriously injured victims and their families.

I would like to thank Bisnar and Chase... They were very professional and extremely effective.

Colleen... emailed me, called me, sent me words of encouragement almost every week! When I [would] least expect it and I had a horrible day or had many questions and concerns she was there!I will always remember the team of professionals and I would recommended Bisnar Chase to anyone.