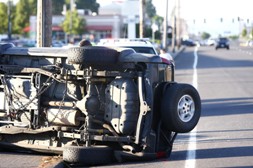 SUV rollover cases can be challenging to prove in terms of fault and liability. At Bisnar Chase, we have more than three decades of experience standing up, fighting and winning against large automakers and industry giants such as Ford and General Motors.

Our SUV rollover accident attorneys have succesfully litigated defective auto parts and won millions for our clients.We have access to experts who can make a difference in your case. Our firm has the resources to get to the truth and ensure that the negligent automakers responsible for causing your injuries are held accountable.

It is a common misconception that the size of SUVs makes them safer than smaller passenger cars. While SUVs can absorb more damage than smaller vehicles, they are alsomuch more likely to be involved in rollover accidents that can cause devastating injuries and fatalities. Many SUVs have a top-heavy design and a wheelbase that is not wide enough to balance the load during sharp maneuvers. Their inherent design makes them prone to tip over or roll over in the event of a collision.

According to an analysis of government traffic accident fatality data, a total of 21,347 passenger vehicle occupants died in 2011, which is 30 percent less than in 1975. However, with pickup trucks and SUVs growing in popularity, the distribution of vehicle types when it comes to fatal crashes has changed. Car occupant deaths have dropped by 51 percent since 1975, while pickup occupant deaths have risen by 15 percent and SUV occupant deaths are nine times as high.

Why SUVs Tend to Roll Over

Sport utility vehicles, by virtue of their design, have a high center of gravity and a narrower track width, which is why they have a greater propensity to tip over or roll over. For several decades now, engineers and safety experts have agreed that manufacturers should change SUV design by lowering the center of gravity and widen the wheel track. However, such basic changes to an SUV's design can be expensive and automakers by and large have been choosing the less expensive and less effective design changes for these vehicles.

Some of the injuries commonly suffered in SUV rollover accidents include:

Victims may need several months or even years of treatment and rehabilitation in order to recover from these types of major injuries. In the case of catastrophic injuries, victims may never recover and may suffer permanent disabilities such as paralysis, quadriplegia or paraplegia. Fractures and lacerations could cause scarring and deformity. In the case of brain injury and spinal cord injury victims, long-term rehabilitation and care may be needed to maintain the patient's quality of life. This could add up to millions of dollars over an individual's lifetime.

Steps You Can Take to Prevent Rollover Accidents

Rollover accidents can happen no matter how careful a driver is - as a result of other factors such as defective vehicle design, a dangerous roadway condition or the negligence of other drivers. Whether an SUV rolls because of a tire blowout or overcorrection, the safety features of the vehicle should still protect you. It will be necessary to not only determine why the rollover occurred, but also to inspect if there were any defects in the design, engineering and manufacturing of the vehicle.

If you or a loved one has been hurt in an SUV rollover, it is important that the vehicle is preserved. Make sure that photos are taken of the crash site and of the positioning of the vehicles before it is transported to a secure location.

You should also take photos of your injuries. Remember to write down the name and contact information for other drivers involved, the emergency responders and of anyone who witnessed the crash.

Other Service Locations for Car Accidents

I cannot speak highly enough of Bisnar and Chase.Bisnar and Chase... stayed diligent throughout our long federal case. They handled everything start to finish and held our hands the whole way!