Stopping at the Scene of an Accident

If a driver causes or is involved in a car accident, he must immediately stop at the scene. Driving away from an accident, especially one where occupants of other vehicles may be injured, is not only irresponsible but against laws discussed in vehicle codes 20001, 20003, and 20004. 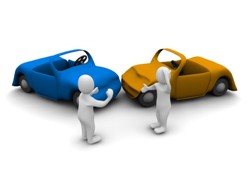 Suppose an accident occurs where one driver collides with another. The colliding driver must stop, report the accident, call for emergency aid, check on the occupants of the other vehicle, and give his or her name, driver's license, and address information to authorities. The information of all involved people and vehicles must be reported.

Fleeing a scene of a car accident or failing to provide the required information after an accident is punishable by imprisonment or fines no less than $1,000. If an occupant of the collided vehicle is injured or killed, the penalty for a driver who "hits and runs" may increase.

The reason for such severe punishments as described in this section is that a driver who causes an auto accident must be held accountable for causing damage to another person. Not notifying authorities and emergency services of an accident could result in the death of an injured passenger, who could have been saved had help come sooner. Further, a driver who causes an accident may be held responsible for breaking other pertinent laws, such as driving under the influence of drugs or alcohol, which played a role in the collision.