The red circular signal always indicates that the driver facing the red light must stop before the crosswalk and intersection. It is illegal to enter the intersection until after the red light changes and a green light is indicated. In warning that a red light will soon appear, a yellow one is shown. 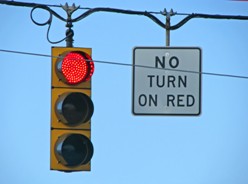 A driver is allowed to continue through an intersection legally if the red light has turned after the driver already entered the intersection. Reading the yellow light carefully and slowing down will prevent drivers from "running a red light" illegally.

There are couple instances when it is legal to enter the intersection while the red light is indicated. The first instance is the more common: a driver may stop at the red light and then proceed through a portion of the intersection to make a right hand turn, as long as the driver makes a complete stop and yields to any pedestrians or vehicles that have the right-of-way. It is also legal to enter the intersection during a red light if the driver is turning from a one-way street onto another one-way street. These actions may be taken unless there is a sign prohibiting turns during red lights.

A red arrow signal indicates the same thing: vehicles are prohibited to enter the intersection, unless making a safe, legal turn.

Red lights mean the same to pedestrians crossing an intersection in the cross walk. If the red light is shown, the pedestrian must wait for a sign that allows movement, unless a pedestrian control signal indicates otherwise.

Drivers should avoid entering intersections during red lights by slowing down during yellow lights. "Running a red light" is dangerous and often results in accidents involving cross-traffic.