How Bicycles Should Ride 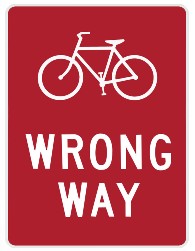 California Vehicle Code 21202 discusses many of the important laws guiding bicycle riders on the roadway, but code 21650.1 draws specific attention to the direction bicycles should ride. Because bicycles are subject to many of the same laws as motor vehicles, bicycles must be operated in the same direction as vehicles are required to be driven.

Riding On The Sidewalk

However, most laws allowing bicycles to be used on sidewalks still require that bicycles give the right of way to pedestrians and that bicycles be operated at a slow, safe speed. Traveling against pedestrian traffic on the sidewalk may be dangerous or illegal depending on local laws.

Riding Side by Side

The California Vehicle Code doesn't state anything about riding side-by-side in the bike lane. However, this article on wikipedia shows that there may be some local municipality rules governing bike riding side-by-side, so we recommend that you contact your city to make sure that it is legal.

In other states like colorado, it is legal to ride two abreast unless doing so impedes traffic, or is otherwise dangerous (On a single lane highway or a windy canyon road). It would be wise to take similar safety precautions in California.