Painted lines on the roadway indicate where it is appropriate for vehicles to be driven. There are many lines, varying in color, thickness, and number, all which divide the road into legal and illegal spaces. Knowing what each line means is necessary for driving lawfully and safely. 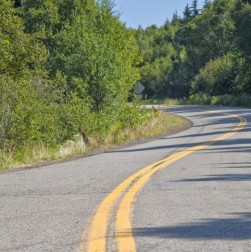 the opposing lanes of traffic. If the lines are solid, no person driving shall cross over or drive to the left of the lines. Occasionally, these double parallel lines are indicated by raised pavement markers simulating painted lines. These raised double lines indicate the same as regular double lines, but are more obvious to a car that passes over them due to the change in texture on the road.

There are a few instances where drivers are allowed to cross over solid double lines, even in the driver does not have a broken line on his or her side. When making a legal left turn at an intersection, turning into a driveway or private road, or making a legal U-turn, a driver may cross over the double lines.

If at any time other authorized signs are posted designating the flow of traffic differently than otherwise shown by the double lines, the signs designate the current laws. Paying attention to painted lines and any signs indicating changes to the roadway is integral to keeping drivers on the same page while driving.