New Survey: Many Admit to Using Cell Phones While Driving

New Survey: Many Admit to Using Cell Phones While Driving 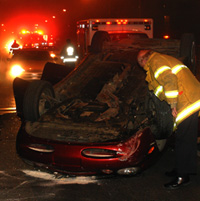 dangerous habit, but admitted to doing so themselves. According to a Jan. 25 news report in the Los Angeles Times, nearly one-third of the drivers surveyed for the study said they regularly talk on the cellphone while driving.

Most drivers say they are “bugged” by other motorists who are jabbering away on the phone while driving, but admitted to doing so themselves, according to a Jan. 25 news report in the Los Angeles Times. The newspaper reported results of a new study released by the AAA Foundation for Traffic Study, which shows that the “do as I say, not as I do” attitude, which seems to exist among drivers when it comes to cell phone use while driving, underscores the need for better public education on this important subject.

According to the Times article, more than two-thirds of those surveyed admitted to having talked on the phone while driving at least once within the previous month, while one-third admitted to doing so on a regular basis. Here are several other interesting and disturbing findings reported in the study:

There is no question that driving while talking on a cellphone or while texting is a dangerous habit that could result in major injury car crashes, said John Bisnar, founder of the Bisnar Chase personal injury law firm. “This study reinforces what we already know. We know that driving while texting or talking on a handheld device is dangerous. It annoys us and yet, a majority of us continue to do it.”

Public awareness is definitely the key to preventing distracted driving habits, Bisnar said. “Most people who continue to do it also set a poor example for their children. By driving while distracted, motorists put not only themselves and their passengers, but also other people on the roadway in harm’s way. No call, text or email is worth a human life.”

Distracted driving is an epidemic says Bisnar. ‘The Department of Transportation is trying to do something about that and their website distraction.gov is a great resource to see how we can all help stop it”.